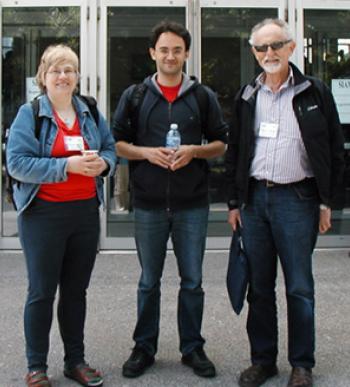 Professor Zeev Dvir (jointly appointed Assistant Professor in the Mathematics and Computer Science Department) is the recipient of the Dénes König Prize for the 2012 year. The prize was awarded at the SIAM Conference on Discrete Mathematics, which was held at Dalhousie University in Halifax, Nova Scotia, Canada from June 18-21, 2012 in recognition of Dvir’s paper, “On the size of Kakeya sets in finite fields,” Journal of the American Mathematical Society 22 (4): 1093-1097 (2009).A picture from the conference (courtesy of the SIAM) is included and includes (from left to right): Karen Collins, Chair of SIAM Activity Group on Discrete Mathematics (SIAG/DM); Zeev Dvir, 2012 Denes Konig Prize winner; Pavol Hell, 2012 SIAM Fellow.
The Dénes König Prize is awarded every two years at the biennial SIAM Conference on Discrete Mathematics. Dénes König (1884-1944) was a Hungarian mathematician and an early pioneer of discrete mathematics. He wrote the first book in the field of graph theory, and his name is associated with many fundamental results. The prize is named in his honor, as his influence over the field is still being felt.