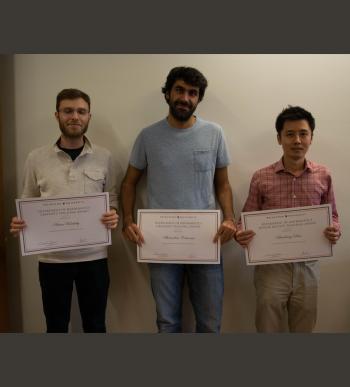 This is the fifth year the “Department of Mathematics Graduate Teaching Award” has been given. Last year, it was awarded to Charles Stibitz and Anibal Velozo Ruiz. The award was created to recognize excellence in teaching at the undergraduate level. This year’s recipients are Alexandros Eskenazis and Artem Kotelskiy who are current graduate students.

Alexandros’ enthusiasm for mathematics was described as inspirational as someone who is always willing to dedicate extra time for students when needed.  Artem makes sure the entire class comprehends complicated concepts and does not hesitate to put forth the effort for students who are struggling.

The “Department of Mathematics Junior Faculty Teaching Award” is awarded to instructor Hansheng Diao and assistant professor Ana Menezes. The award was created to recognize excellence in teaching at the undergraduate level.

Hansheng’s lectures were described as exceptionally clear, well-organized, inspiring, informative, and challenging, and one student described him as “literally the best teacher I’ve had here at Princeton.”  Ana has been an inspiration to her students with an engaging and approachable teaching style that one student described as a “little lightbulb going off in my head.”

Selection for both awards was made by a committee of faculty members.