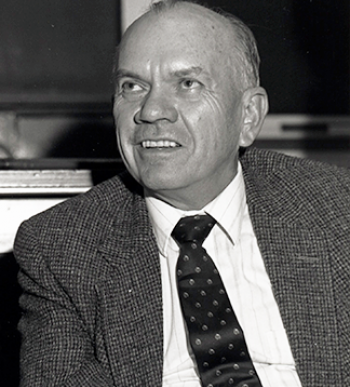 John Coleman Moore, Professor of Mathematics Emeritus, died in Rochester, NY, on January 1, 2016, at the age of 91.

Moore was one of the most influential mathematicians of the latter half of the twentieth century in the areas of Topology and Homological Algebra.  His groundbreaking papers propelled the area forward, and his ability to discern new directions and new points of view had a broad effect on other researchers, and particularly on his many students.  He was an advocate of using the most abstract and general approaches to geometric problems, which often produced astonishing new results.

Born on May 27, 1923, in Staten Island, NY, Moore served in the Army in Europe in World War II, and then received his Bachelor’s degree from MIT in 1948 and his Ph.D. from Brown University in 1952, under the supervision of G.W. Whitehead.

He joined the Princeton Math Department in 1952, and retired in 1989. He then moved to Rochester, where he was an active participant in the University of Rochester Mathematics Department for many years.

Princeton in 1952 had been the world center of the field of Topology for 30 years since the days of J.W. Alexander, S. Lefschetz and O. Veblen, and later N. Steenrod and R. Fox. In the late 40s and 50s, a new center of Algebraic Topology arose in Paris, with the work of J. Leray, H. Cartan, J.-P. Serre, and A. Borel. The powerful new technique of "spectral sequences" introduced by Leray with analytic applications in mind, was adapted by Serre to revolutionize the study of Homotopy Theory, a Princeton specialty. Moore as a student at Brown, produced a breakthrough in his thesis with his approach to this technique.

Following his first years at Princeton, Moore was invited to Paris in 1954 to participate in the famous Cartan Seminar. In addition to his many other significant contributions to the seminar, (published in mimeographed form in 1955, and now a collector's item), he gave, in the last chapter of less than 20 pages, an exquisite account of the then current state of homotopy theory, which for many years, was the number one resource for learning this subject.

Back at Princeton in 1955, Moore was the exponent of the French school, and the most abstract approach to the subject, as in the Bourbaki project. In following years, his Ph.D. students (24 in number, of which Browder was number 2), contributed to the subject in diverse directions, and his mathematical descendants (according to the Math Genealogy Project) number 927.

He produced many of the fundamental points of view and tools of algebraic topology of the late 20th century.

It is sometimes difficult to appreciate, in retrospect, the significance of a fresh point of view, particularly when it is so profound that it immediately becomes standard. His concentration on a single prime, beginning in his thesis, and the introduction of what are now called Moore spaces, an analog of the sphere at a prime p, were landmarks in the subject's development and quickly became universally used.

The many directions to which he steered his students often developed into exciting subjects. His appreciation of the role of strict associativity, in his construction of the Moore path space, as opposed to associativity up to homotopy, led to Stasheff's thesis analyzing the difference, and was the starting point of a vast development, including the study of operads of P. May ( another of his students), and with all its later ramifications, has become very popular in both mathematics and mathematical physics.

His invention of the Bockstein spectral sequence, and the later treatise on the structure of Hopf algebras with J. Milnor (then a colleague at Princeton), became his most cited article, and revolutionized the study of H spaces ( and was crucial to all of Browder' s early work). His work on Homological Algebra with S. Ellenberg, the Ellenberg-Moore spectral sequence and graded homological algebra, developed the subject both in the usual way over algebras, but also in the dual setting of coalgebras, and became basic in the subject.

His work on exponents of homotopy groups with F. Cohen and J. Neisendorfer at Rochester renewed hope for qualitative general results in an area which sometimes seemed doomed to special calculations. Neisendorfer recalls working with Cohen all summer together on a resistant argument in their collaboration with Moore, and presenting their laborious arguments to Moore in the fall. "If it's true, it can't be that hard", he said, and within 10 minutes, produced an elegant proof. They had been "beating all summer with sledgehammers on the difficulty, and he pulled out his razor sharp rapier and killed it with a single thrust".

As a teacher, he would often ask his students questions such as "what is the underlying idea or structure here", "what is the broadest context in which this makes sense", "where does this apply", stimulating deeper and more philosophical thoughts, often into related subjects, as well as deeper understanding of very technical results. In his time at Princeton, Moore also mentored a host of undergraduates, who often ended up in distant fields (for example in the human genome project).

Moore never married or had children, and often his students were like family, eating with him and joining him for drinks afterward at his apartment, for wine or Laphroaig. His kindness and thoughtful helpfulness were greatly appreciated and his students had deep affection for him. His legacy lives on in modern algebraic topology, and in the hearts of former students and collaborators.