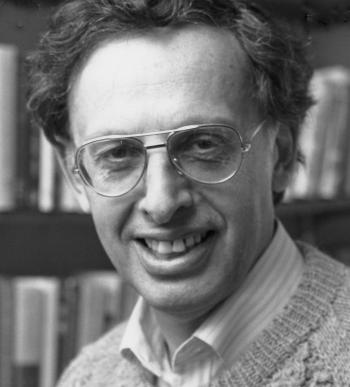 Elias Stein, a longtime member of Princeton’s Mathematics Department, died on December 23, 2018, at the age of 87. He is survived by Elly, his wife of 59 years, a brother Daniel, a son Jeremy, a daughter Karen, a daughter-in-law Anne, and three grandchildren Carolyn, Alison, and Jason.

Born on January 13, 1931, in Antwerp, Elias Stein and his family fled Belgium in 1940 and moved to the United States in 1941. He graduated from Stuyvesant High School in 1949, and attended the University of Chicago, earning his Ph. D. in 1955 under the supervision of Antoni Zygmund. After postdoctoral work at MIT and the Institute for Advanced Study, Stein joined the Princeton University Department of Mathematics as a full professor in 1963. He held an endowed chair as the Albert Dod Professor of Mathematics for several decades, until his retirement in 2012.

Stein was a towering figure in Mathematics. Some of his fundamental discoveries include the theory of $H^p$ spaces in several variables, the method of complex interpolation of families of operators, the concept of almost orthogonality, the extension of the Littlewood-Paley theory, the restriction phenomenon for the Fourier transform in Euclidean spaces, the Kunze-Stein phenomenon on semi-simple Lie groups, the discovery of (then) new unitary representations of the classical groups (contradicting erroneous established previous knowledge), and many others. Stein was the first to perceive and explore the intimate connections among three fields of Mathematics – classical Fourier Analysis, Representation Theory, and Partial Differential Equations in Several Complex Variables.

Stein was the author of several classical books and research monographs, which exerted great influence on generations of mathematicians. In the early 2000s, with the assistance of his student Rami Shakarchi, Stein created a sequence of advanced undergraduate courses and wrote four accompanying textbooks. These textbooks set a new standard. As the dissertation advisor of over 50 students, Stein has been among the most influential teachers of Mathematics in the last century.