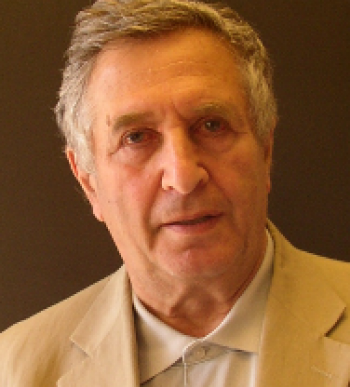 Yakov Sinai, Professor of Mathematics at Princeton University, is receiving the 2013 AMS Leroy P. Steele Prize for Lifetime Achievement. Presented annually by the American Mathematical Society, the Steele Prize is one of the highest distinctions in mathematics. The prize will be awarded on Thursday, January 10, 2013, at the Joint Mathematics Meetings in San Diego.Sinai is honored for "his pivotal role in shaping the theory of dynamical systems and for his ground-breaking contributions to ergodic theory, probability theory, statistical mechanics, and mathematical physics," the prize citation says. "Sinai's research exhibits a unique combination of brilliant analytic technique, outstanding geometric intuition, and profound understanding of underlying physical phenomena." His work is especially impressive for its breadth. "In addition to its long-lasting impact on pure mathematics, [Sinai's work] has played a crucial role in the creation of a concept of dynamical chaos, which has been extremely important for the development of physics and nonlinear science over the past thirty-five years." The citation notes the overwhelming influence of Sinai's work over the past half-century, including his more than 250 research papers and his several books. He supervised more than 50 doctoral students, many of whom have become leaders of the field in their own right. The citation concludes, "The Steele Prize for Lifetime Achievement is awarded to Sinai in recognition of all these achievements."
The full citation for this prize and additional information can be found in the Joint Mathematics Meetings Prize Booklet.
Text based on AMS news release.