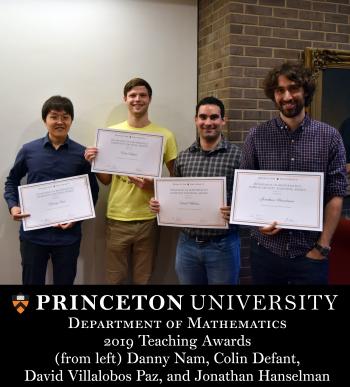 The Department's annual teaching awards were announced at a special tea on Wednesday, October 16. This year the awards went to Assistant Professor Jonathan Hanselman and graduate students Colin Defant, Danny Nam, and David Villalobos Paz. The awards are given by the senior faculty and are based largely on student evaluations.

Students noted that Hanselman was “approachable, clear, and genuinely caring,” and “simply amazing!” They felt he “absolutely stimulated the curiosity of all the students in the class,” and appreciated his discussions of more advanced topics such as the Fourier series. Students also gave him kudos on his pre-lecture videos.

Defant's students cast similar praise, saying he is “amazing at explaining the tricky material” and that “getting him as a preceptor is like winning the lottery!”

Nam's students though him a “very dedicated, helpful, and patient” instructor, who “made multivariable calculus about as fun as it can be.”

Finally, Paz's students called him “a fantastic instructor who broke down the material before exams in a simple yet comprehensive way." They particularly noted his well-organized board work and, in the words of his students, a “true linear algebra king.”

Congratulations to all four of this year's winners!