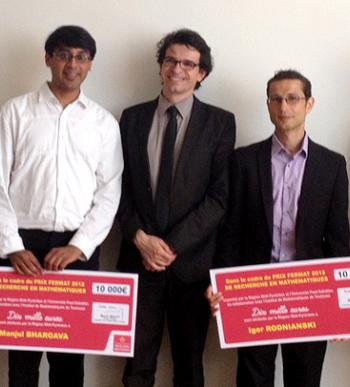 Today, May 25th 2012, the 2011 Fermat Prize for mathematical research was officially awarded to Manjul Bhargava, the Thomas D. Jones Professor of Mathematical Physics and the Brandon Fladd, Class of 1983, Professor of Mathematics, and mathematics professor Igor Rodnianski.  The prize was awarded by the president of the Université Toulouse III - Paul Sabatier - at a ceremony held at the Université Toulouse III/Toulouse Mathematics Institute.The Toulouse Mathematics Institute in France has awarded the biennial prize since 1989 to researchers whose work is accessible to the greatest number of mathematicians in fields shaped by Renaissance French mathematician Pierre de Fermat. Bhargava was recognized for his work in number theory and elliptic curves. Rodnianski was recognized for his contributions to the study of General Relativity equations and the propagation of light on curved space-times.